skip to main | skip to sidebar

Boys and girls of Beach Body land,
Anne and I went to high school together way back in the 70's. We got together to ski at Crested Butte this past season and got talking about health, fitness, weight loss, etc. What a shock, right?? After our conversation, her and her fiance, Bob decided to head back home and join the team. Her day 60 has come and gone and her day 90 is fast approaching. I wanted to share an email she sent me with a photo of her progress calendar. This girl and her man, Bob are on fire! I am so proud of them!!! 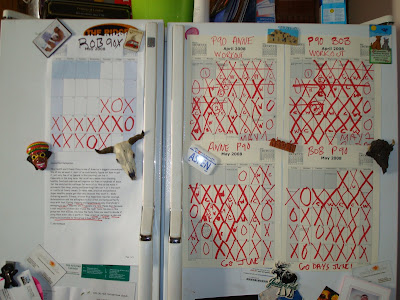 Hi Team,
For those who started on April 1...HAPPY 60TH!!!! I have 2 reasons to celebrate...my 60th day of being committed to P90 and my 50th year on this earth!!! Thanks to P90, Tony and all you guys I am on my way to healthier,more fit fifty years (God Willing!). 2 months ago, in front of my 10 year old niece, I attempted a cartwheel (easy for most and used to be for me), but my wrists were too weak and couldn't support my weight so I flopped to the ground. Last week I made another attempt and to the delight of both my niece and I, I landed a perfect cartwheel! WHOO HOO! Back flips here I come! Hope you are all seeing some kind of results. For those first starting out...there is light at the end of the tunnel. Just take it one day at a time!!
Peace and P90!
Annie
Posted by Tony Horton at 9:39 PM 6 comments:

Green this, green that, hybrid cars, green living, green house gases, what does it all mean? There’s a lot of talk lately of the environment and what we can do to help make this world a cleaner, better place to live. Now how does that impact my little world? And why am I writing about it? Because it impacts my little world, Your little world and our big world.